Stirling Castle towers above some of the most important battlefields in Scotland's history; including the site of Stirling Bridge where William Wallace was victorious over the English in 1297; and Bannockburn where Robert the Bruce defeated the same foe in 1314.

Many great events from Scotland's past are associated with Stirling Castle.  Among the best remembered is the murder of the Earl of Douglas by James II and the throwing of the corpse from a window.

Stirling Castle is closely bound with the life of the ill-fated Mary Queen of Scots.  She spent her childhood in the Castle.  Mary's coronation took place in the Chapel Royal within the Castle in 1543 and she narrowly escaped death by fire in 1561.  It was at Stirling that Mary's son, the future King James VI was baptised.

The reconstructed mediaeval kitchen along with the interpretive displays, the recently restored Great Hall dating from the Middle Ages, the fantastic restoration of the Palace within the Castle, the beautifully kept gardens and the Military Museum all add to the enjoyment of visiting Stirling Castle. A great day out! 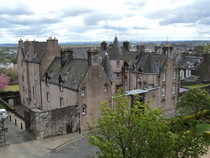 The finest and most complete example in Scotland of a 17th Century town residence.  Built by Sir William Alexander, founder of Nova Scotia, it passed to the Argyll family on his death.  The principal rooms- including the Laigh Hall, dining room, drawing room and bedchamber - are magnificently restored and furnished as they would have appeared during the 9th Earl of Argyll's occupation around 1680.

The furniture and furnishings include beautifully carved and inlaid tables, elegantly upholstered chairs and glorious tapestries and wall-hangings.  Based on detailed inventories, the interiors have been authentically recreated to the highest standard by skilled craftsmen.

It's well nigh impossible to drive around Stirling without seeing the National Wallace Monument.  This 220ft tower dominates the surrounding plain.  Take the 246 steps to the top and you will enjoy some of the most awe-inspiring views in Scotland.  You will also find much more to appreciate on the way up.