The Portcullis: experience our hospitality

The Portcullis enjoys many years of tradition. It is located right beside Stirling Castle Esplanade at "The Top of the Town"  Built in 1787, its original purpose in life was to serve the commumity as a school for boys.  It stands on the site of the previous school, which was demolished when larger premises were required.  Indeed within the former building, King James VI of Scotland was educated - more than five centuries ago.

When the school again required larger premises and moved further down the road, the building was used by the Argyll & Sutherland Highlanders as a Military Store when the Army was based at Stirling Castle.  In subsequent years, after the army left the Castle, the property became a Hotel and that is how it remains today.﻿﻿

Lunches and Dinners are served in our Lounge Bar which has a casual, relaxed atmosphere, typical of a traditional Scottish Inn.  There is something for everyone on our varied menu, including haggis, but you have to catch it first!

Lunches are served daily from Mid-day until 3pm and our Dinner Menu is served from 5.30pm.

Reservations are recommended for Dinner on weekend nights as we are always very busy and we do not necessarily keep tables for residents as you may have other arrangements. 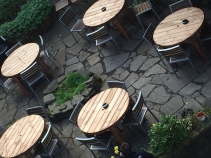 In Summer, weather permitting, meals and drinks may be enjoyed "al fresco" in our pretty walled garden 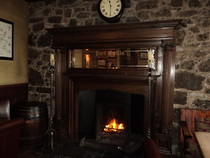 ......And in Winter we have a wonderful coal fire